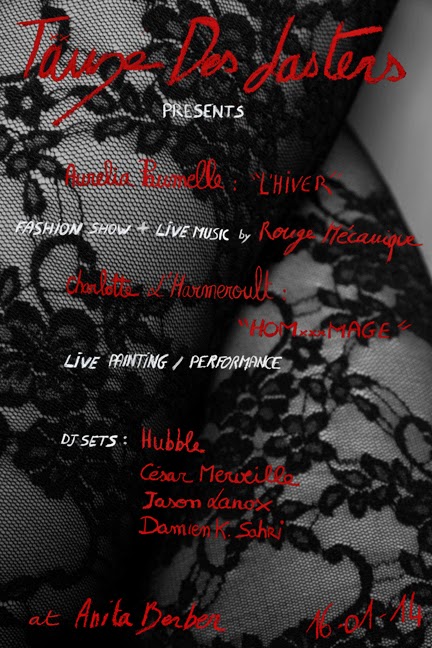 Anita Berber was an extremely modern figure that could evolve in the Berlin of today. In a city imprisoned between two wars, she consumed her life dancing. Her movements, rich, sensual, seemed to seek a fading freedom. Controversial, she assumed her bisexuality, transcending a shockingly crude nudity.

We can relate the work of Aurélia Paumelle to this famous character. Her clothes, dark and graphic, depict the city that we are experiencing. They refuse to choose for a gender and sublimate the figure of both male and female, offering them a complete freedom of gestures.  On this evening, she will present her new collection.

Romain Azzaro aka Rouge Mécanique, has been working with her on her last two collections. His sound, wild and profound, draws a bridge between Rock n’ Roll and electronic music. An LP is soon to be released on the highly acclaimed label Pyramids of Mars. For this show, he will propose an extremely raw live set that perfectly illustrates the universe of the designer.

The visual artist Charlotte L’Harmeroult is quite familiar with the world of fashion. Within the artistic duo that she forms with her father, JN+C, she signed a series of painted fashion photographs. Under her colorful brush, the silent models are brought to life, and finally speak. Last year, Mauboussin decided to support this work with an exhibition Place Vendôme and a limited edition of 100 silk scarves. Just after the show, Charlotte will celebrate again the women’s freedom. She will pay homage to Anita Berber with an art performance, incarnating for few hours the sensuality of the renowned blackbird.

Following this great start of the evening, you will also have the chance to honor the memory of Anita Berber by dancing on the psychedelic grooves proposed by: